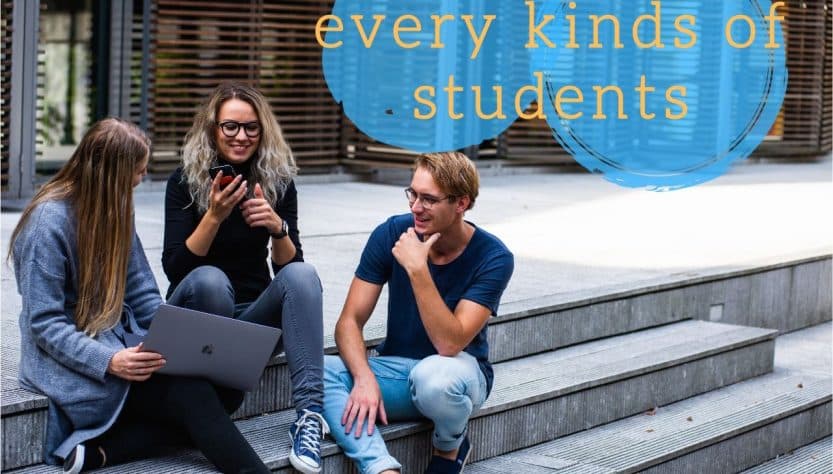 Being a student means you have lots more free time but little to no money. We’ve been there and we’ve done that. It’s infinitely different when you’re in college, though. Sure, you still have plenty of free time but you use them to study and make projects. The rest is for sleep and your part-time job. Hey, at least you’ve got money to call your won, despite it going to your black-hole college debt and your bills.

And in both high school and college, you can’t deny that there are still the same kind of people in it. The same kind of students in every classroom that makes writing school-related stories and fanfictions more fun.

You see this one asking deeper questions about the material, will blurt out “teacher, you said today is pop quiz day” or even ask for more homework. Yes, the person you want to stab sometimes.

This person can either be too funny or too annoying. Because while you take stress off by laughing at his jokes, constantly interrupting the teacher and seeing him take everything as a joke also makes you want to stab him as well.

One who can’t let go of their phone

I might have been this if I had a phone back when I was still in high school. I was too afraid of my phone getting confiscated in college to pull it out though. But yeah, you seem them on their phone all. The. Time.

You ever have those classmates who seem to have an army of crazy stories about parties he or she’s been to backing them up every day?

Sleeps all the time

If they aren’t falling asleep during lectures, you see will see them nodding off on their palm while fighting off sleep. During breaks, don’t expect them to be conscious.

I, too, was like this. Can’t really pay attention in whatever the teacher’s been droning on about when your mind is much more interesting.

Is involved with everything

Clubs and other after-school activities are their hobbies, probably. Organising stuff in school might also be their thing too. The point is, they are everywhere, doing something important.

They’re either always drawing between and after classes or writing and making music. Every class has one or two.

You could say they’re the ones who worry about everything.

Never studies but gets high grades

There is always that one student that don’t study but get high grades anywhere. Reasons ranger from having already studied the course previously to gifted knowledge.

Works hard for every grade

The opposite of the previous student where they have to work hard to get the high grade they need, even though it’s hard for them.

They always ask for a pen or to borrow notes from you. This is because they either don’t pay attention or are hardly there in classes.