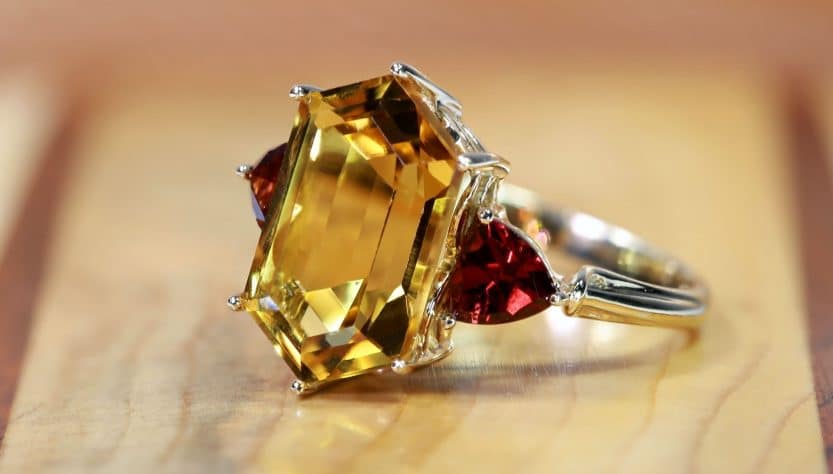 Garnet. The very word conjures up images of deep red hues and glowing embers. This vibrant gemstone has been revered throughout history for its beauty and powers.

But what exactly is garnet? Where does it come from, and what does it mean? In this blog, we’ll explore the origins and meaning of garnet, as well as some of the stunning jewellery pieces that can be made with this gorgeous stone. We’ll also cover some tips on how to care for your garnet jewellery so that it will continue to shine for years to come.

The History of Garnet

Garnet has been around for centuries and has been prized by jewellery lovers for its rich, vibrant colours. The word “garnet” comes from the Latin word “granatus”, which means “pomegranate”. This reference is thought to come from the deep red garnet gemstones that resemble the fruit’s seeds

Dating back from the 3000 B.C, garnets were found as beads of a necklace worn by a young man. This is proof that garnet is an ancient stone that has been loved and adored by many.

Garnet is believed to have first been mined in India, where it was used to make jewellery and other decorative items. From there, it spread to other parts of the world, including Egypt, Rome, and England. Garnet jewellery was particularly popular in the Victorian era and remains a popular choice for jewellery today.

Garnet is a type of mineral that is found in many different colours, including red, green, orange, yellow, and purple. The most common type of garnet is the dark red variety, which is often used in jewellery. Garnet is known for its hardness and durability, as well as its brilliant colour. It has been used throughout history for a variety of purposes, including decoration, weaponry, and industrial applications. Today, garnet is still highly prized for its beauty and its many practical uses. Whether you’re looking for a sparkly piece of jewellery or a tough abrasive for sanding down wood, garnet is a versatile and valuable material.

So what does garnet symbolize? Garnet is believed to be a stone of protection and strength. It is also said to promote positive energy and help with personal growth. Known as the January birthstone, garnet is also a popular choice for gifts of love and is traditionally given as a 19th-anniversary gift. Today, garnet is often used in earrings, necklaces, and rings.

Garnet jewellery can be found in many different styles, depending on the type of garnet that is used.

Dark red garnet is often used in bold, statement jewellery pieces, while lighter shades of garnet are often used in more delicate jewellery. Whether you’re looking for a garnet ring, necklace, or earrings, you’re sure to find the perfect piece to suit your taste. And with so many options available, it’s easy to buy garnet gemstones online. So why not add a little sparkle to your life with a beautiful piece of garnet jewellery?

Here are some popular styles of garnet jewellery include:

Earrings: There are many different styles of garnet stones in earrings. Each style has its own unique beauty. The most popular styles include dangling earrings, stud earrings, and hoop earrings. Dangling earrings are often adorned with Swarovski crystals or other sparkly stones. They catch the light and shimmer as you move. Stud earrings are more understated but no less beautiful. They can be simple solitaire stones or clusters of Garnets in a variety of cuts. Hoop earrings are classic and elegant and can be worn both dressy and casual occasions.

Necklaces: A garnet necklace is a perfect way to show off your love of this beautiful gemstone. For a classic look, try a strand of round garnet beads. Or for something a little more unique, opt for a teardrop-shaped pendant. If you’re looking for a pop of colour, go for a multi-stone necklace with garnets in different shades. And if you want to make a statement, try a chunky style with large gemstones.

Rings: One of the most popular styles of garnet rings is the solitaire ring, which features a single stone set in a simple setting. This style highlights the natural beauty of the garnet and is perfect for everyday wear. For something a little more special, consider a ring with multiple stones. This type of ring can feature multiple colours of garnet, creating a unique and stunning look

How to Care for Garnet Jewellery

So there you have it – a brief overview of the history and meaning of garnet jewellery. Whether you’re a long time fan of garnet, or you’re just getting started, you should only go to a qualified jeweller to buy garnet jewellery. Talk to top jewellers so you can be sure that you’re getting the best possible quality.